This coming fall I have to drive between St Paul and New York, and then back again. I love rotisserie chicken and slowly collapsing fast casual chains. We both know where this is heading. How many conveniently located Boston Market's are there along my drive? Can I live my dream of eating Boston Market for all 12 meals of the journey? Will they let me have extra skin? Today, on the Web Blog - Blog on the Web, we answer some but not all of these questions using Alteryx Designer.

Note: While most humans and software programs refer to vertically oriented data as being in columns, Alteryx describes this data as fields. I will use column and field interchangeably. I will also switch between first and second person liberally. Get excited!!

20 years ago, 250 million Americans ate at Boston Market up to 8 times a week. Comedians told jokes not about a multitude of Starbucks on adjacent streetcorners, but instead boundless Boston Markets. On humid summer nights, the pungent and permeating odor of slowly roasting, lightly herbed chickens smothered the nostrils of every parent and child, every bird in the sky and mole in the ground. While Boston Market once dominated the dimensional plane in which all fast casual restaurants simultaneously exist, it is now a feeble, aged giant - ready to blink out of existence any day. With so many franchise locations having closed over the last decades, it can be hard to keep track of which ones are still open. There is no easily accesible master list, and google results include many which are permanently closed.

With certifiable information unavailable, we must turn to the only possible cannonical source of Boston Market information - Boston Market. Each Boston Market location has it's own page on the Boston Market website, with it's address embedded as part of the URL. The answer has been inside you the whole time Boston Market! In order to get a list of all the locations, I crawled the Boston Market Locations page using XML-Sitemaps and was given a plaintext list of about 500 URLs. I copied and pasted those into an excel sheet - I probably could have done Alteryx Text Input here, but old habits - and was off, already tasting that signature blend of herbs and spices.

Play along at home - Bostonmarketurls.xlsx

In order to take this list of URLs containing address information and turn it spatial data, the addresses must be extracted, cleaned, and geocoded. Geocoding is a process wherein an address is provided and latitude/longitude points are spat out. The US Census Bureau has a handy API for geocoding that we will be utilizing once we have the addresses.

Lets get this out onto a tray of comprehensible chunks. 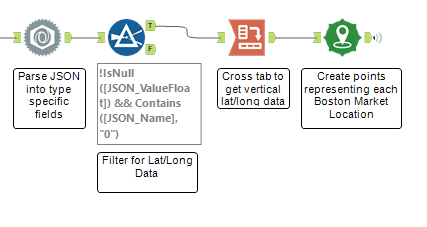 Importing a .geojson File Into Alteryx

This was a fun project, but not all my questions were answered. I still don't know if I can get extra skin at the Boston Markets along the way, and I don't think Alteryx can ever tell me that! Due to the limitations of the Alteryx map tool my map does not look amazing, and there is an extra "25" labelled on the map for unknown reasons. The address scraping wasn't perfect, and if this had been a real job instead of a fun, fun, fun project I would have done more hand-checking of the data. But, if we've learned anything from this project its that neither about the journey nor the destination, but instead, all about Boston Market.

About the Author: Tony Albanese is a freelance data consultant and researcher specializing in the legal industry. Contact info AT antalb.com